More often, one may notice the printed painting of the Last Supper hanging on dining walls of many Filipino homes, a customary tradition for the predominantly Roman Catholic country which was ruled by Spain for more than 300 years since 1521. Aside from the painting, some are sculptured wood did by artisans or hammered stainless and aluminum metal artistically embossed crafts.

Most people who are patrons of this religious art do not have the idea that the artist of this masterpiece was Leonardo Da Vinci, an Italian master of the art, painter, inventor, mathematician, alchemist, and follower of ancient philosophy. The mural painting housed by the refectory of the Convent of Santa Maria Delle Grazie in Milan, Italy covers the end wall of the dining hall which measures 4.6m x 8.8m using egg tempera popularly painting medium during that time before the development of the oil painting.

The painting represents the scene of the Last Supper of Jesus with his apostles, as it is told in the Gospel of John, 13:21

The Alchemical Allegory of the Last Supper

Da Vinci’s Last Supper focuses on Jesus Christ as the center of the painting with the Apostles divided equally into both sides in a group of four by three. What is the meaning behind the formation?

According to the ancients, the First Matter has a fourfold structure which they attributed to the existence of four archetypal forces or elements of creation which they named Earth, Water, Air, and Fire.

Empedocles  (494 BC), a Greek philosopher, was the first Philosopher who formalized the cosmogonic theory of the four classical elements. In his Tetrasomia “Doctrine of the Four Elements”,    Fire and Air are “outwardly reaching” elements, reaching up and out, whereas Earth and Water turn inward and downward.

Aristotle (384-322 B.C.)  promoted Empedocles’ idea that all materials on Earth were composed of the four elements water, air, earth, and fire. Aristotle added a fifth element called ether, which was supposedly a perfect substance of which heavenly bodies were composed.  Aristotle believed that humans were a complex mixture of the four elements. Since people were not all alike, there had to be differences in the amount of each element they were made up of.

Leonardo Da Vinci,  (April 15, 1452 – May 2, 1519), the painter of the Last Supper was once associated with the Rose Cross Movement during the Rennaisance Period. It was in  1495 to 1498  in Milan, Italy when he was commissioned by the Duke of Milan Ludovico Sforza to do a mural painting of the Last Supper on the refectory of the city’s Monastery of Santa Maria Delle Grazie based on the Gospel of the Bible’s Passover Dinner.   It took him three years to complete the 4.6m x 8.8m mural as he could not find the right model for the personalities of Apostles including Jesus Christ.  From the book Leonardo’s Shadow by Christopher Grey, he was able to get volunteer model from store owners in the community whom he was indebted because of his financial difficulties of having short of payment from his mentor, the Duke.

Analyzing the formation of the apostles on the painting, it seems Leonardo  Da Vinci created an unusual esoteric pattern of the alchemical elements of creation, the four elements, the trinitarian principle: body, soul and spirit or the alchemical salt, sulfur, and mercury,  and then the duality of all things.

The last Supper representation of the Zodiac showing the equinoxes and solstices and their corresponding elements and modalities.

The Four Elements and the Three Modalities

According to the ancient wisdom of alchemy, these four elements form the basis of all life:

Fire, representing action and creativity, fuels the signs of Aries, Leo, and Sagittarius.

Air, corresponding to intellect, is the dominating force for Libra, Aquarius, and Gemini.

Earth, which stands for substance and practicality, is the hallmark of Capricorn, Taurus, and Virgo.

The four elements form the backbone of all Western mysteries, including Kabbalah. Each of the four elements can be expressed in three different modalities.  Astrology follows the four seasons, which correspond to the four elements, and each of these three month seasons is comprised of a cardinal, fixed, and mutable.

Even though Aries, Leo, and Sagittarius, for example, are all fire signs, they each represent a different archetype. Aries personifies the warrior or soldier. Leo embodies the king, who is protected by the warrior. And Sagittarius connotes the prophet, wizard, or adviser, who ensures the upholding of the ethics of both the warrior and the king.

Aries, the cardinal fire sign, begins the process. Sagittarius, the mutable sign, acted as the messenger, the connector, the agent of change from one season to the next. Leo, the fixed fire sign, then receives the flame from Aries and strives to maintain it.

The fixed signs, embedded in the middle of the season, radiate the full force of the seasonal trend. Taurus occurs when spring blooms everywhere; Leo falls under the strongest sun. Scorpio, the sign of death, rules when the leaves fall from the trees, and Aquarius rules when ice and cold fiercely grip the ground.

The mutable signs, meanwhile, foster the transition of one season to the next in the same way that film editors endeavor to avoid jarring jump cuts between scenes. Gemini bridges spring and summer, Virgo ushers summer into autumn, Sagittarius shoots arrows from autumn to winter, and Pisces thaws winter into spring. Just as diversity and mutations in evolution ensure the survival of many different species and therefore a dynamic and functioning biosphere, the mutable signs provide the change and diversity that permit survival amid the earth’s changing physical states. The mutable guarantee our ability to adjust.

The Power of the Signs

Combining the characteristics of its element with these of its modality will determine the root power of any particular archetype.

Aries: cardinal fire. the root power stems from an ability to initiate (cardinal) action (fire). Success requires initiation, the pushing, and furthering of the goals.

Taurus: fixed earth. The power comes from stability (earth), patience, and sustaining (fixed) an effort for long periods of time. The need to connect to the five senses in matters that concern talents, values, and finances.

Gemini: mutable air. The root power manifests in the ability to adjust (mutable) the style of communication (air) to any fluctuating circumstance. Improvise (mutable) and wield intelligence (air).

Cancer: cardinal water. The power derives from initiating (cardinal) emotional processes (water). The giver (cardinal) of life, give birth (cardinal) to situations that will allow nurturing (water) people or projects.

Leo: fixed fire. The root power comes from perseverance (fixed) in action (fire). Can become famous and respected in your circles if you maintain a steady and focused (fixed) creative force (fire) with the ultimate goal of benevolence.

Virgo: mutable earth. The root power emerges from the ability to edit, fix, and adjust (mutable) situations so that life around becomes more efficient and effective (earth). This editorial work ultimately ought to be directed toward service to humankind.

Libra: cardinal air. Your power root lies in initiating (cardinal) communication (air). This ability grants you mastery over relationships and justice, provided that you initiate (cardinal) conversations and work on your diplomacy (air).

Scorpio: fixed water. the ower root springs from the ability to remain (fixed) intensely emotional and intimate (water) in relationships.

Sagittarius: mutable fire. the power emerges from the capacity to spread (mutable) philosophies, moral codes, and belief systems (fire), especially when engaging in an innate sense of optimism. The duty to humankind relates to teaching, learning, and adjusting (mutable) the negative attitudes and actions (fire) of others.

Capricorn:  cardinal earth. Your root power comes from initiating (cardinal) practical applications of talents, assets, and resources (earth). You embody the business plan of the zodiac wheel. Your success is assured when you set a definite goal (cardinal) and then practice patience and discipline (earth).

Aquarius: fixed air. the root power stems from a stable and consistent (fixed) interplay with the community and friends (air). Pillar (fixed) of a large group of people (air). Success lies in cultivating innovative, funny, and futuristic ideas (air).

Pisces:  mutable water, the root power derives from the capacity to improve life and generate change (mutable) via imagination, mysticism, and compassion (water). It can cultivate success with the sensitivity to the emotional (water) states of others. Dreams and fantasy (water) often serve as the tools by which manifest the preferred life.

The Rosicrucian Order of Studies

“According to the credo of the mysteries, only by developing one’s faculties of will, intuition, and reason to an extraordinary degree could one ever gain access to the hidden forces in the universe. Only through complete mastery of body, soul, and spirit could one see beyond death and perceive the pathways to be taken in the afterlife. Only when one has conquered fate and acquired divine freedom could he or she, the initiate, become a seer, a magician, an initiator.” 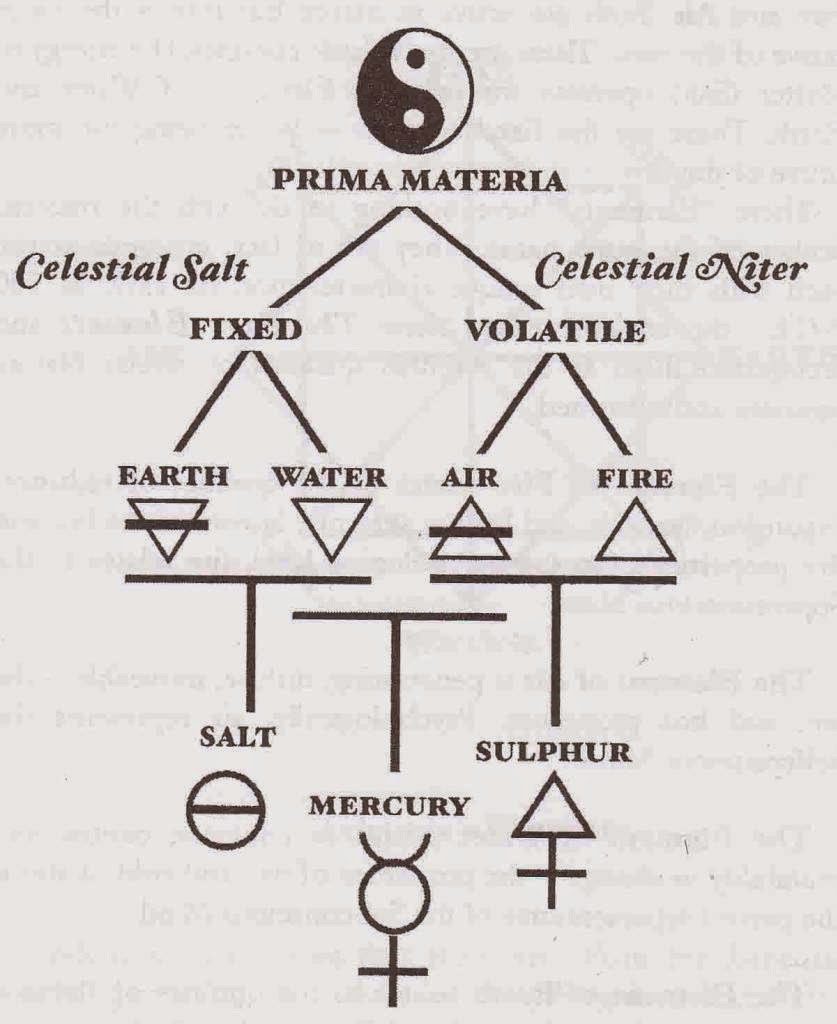 Frater Gabriel Comia, Jr.  (VII Grade) is a member of Societas Rosicruciana In Civitatibus Foederatis (SRICF), Pearl of the Orient College,  and  Societas Italica Rosae+Crucis ( S.I.R.+C.), Italy.  A Master Mason under the jurisdiction of the Free and Accepted Masons of the Grand Lodge of the Philippines.